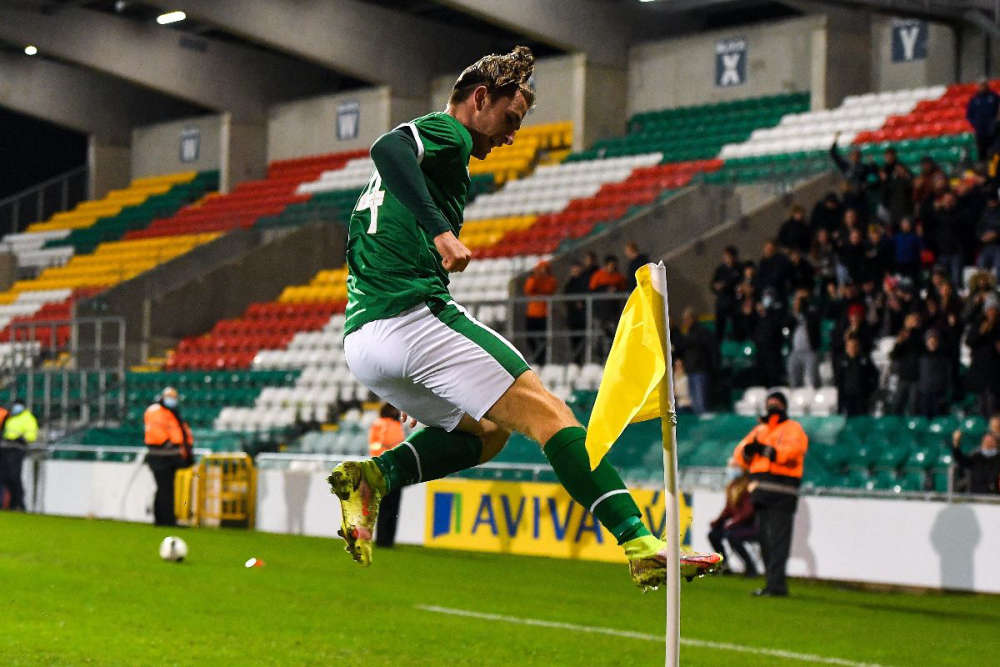 Ollie O'Neill sent a crisp strike past the Swedish keeper in the 92nd minute.

Ollie O’Neill was the hero for the Republic of Ireland as his 92nd-minute winner was enough to claim the three points and a vital win for Jim Crawford’s men in Tallaght.

In a tight game with very few chances, Ireland’s persistence paid off with a well-taken effort from O’Neill to keep Ireland in the hunt for qualification.

Crawford made two changes to the starting line-up as Ross Tierney and Joshua Kayode came in for Conor Noss and Colm Whelan.

Both sides enjoyed periods of possession in the opening minutes of the contest but neither side could create a chance of note. Tyreik Wright’s free-kick into the area was the first sight on goal and it did cause the Swedish defence some issues with the ball eventuality being cleared. Rami Al-Hajj had the first shot on target as he picked up the ball from midfield and hit a rising shot that Brian Maher was forced to tip away at the near post for a corner.

Kayode nearly capitalised on a defensive slip as a back pass was short back to Swedish keeper Samuel Brolin but his effort went wide for a corner. Wright had another free-kick that was cleared by the Swedish defence however the ball fell to Will Smallbone whose half volley went over the bar.

Tierney and Kayode linked up well to advance into the Swedish area, however, Tierney lost his footing at the opportune moment and the ball was cleared, Lee O’Connor’s second ball into the area was well caught by Brolin. Tierney had a fantastic effort to put the home side ahead as O’Connor’s cross once again met Tierney into the area but his shot went over the bar.

Smallbone just before halftime intercepted a Swedish back pass however his effort was blocked down by the backtracking defender and Brolin gathered the loss ball.

The first chance following the interval came from the visitors when a cross from the right came to Amin Sarr in the area but his effort went over the bar. He was to go close once again as Sweden broke from dispossession and Sarr’s effort went over Maher’s crossbar. Sweden continued to press and Bilal Hussein’s volley from a corner went wide.

Second-half substitute for Ireland William Ferry broke free of the Swedish defence but his shot was cut out at the last second, he followed that up latching onto a Joel Bagan low ball but his effort went over. Kayode went close once again at the near post from a from left from Wright but despite under pressure his effort just went wide.

Jake O’Brien provided an excellent defensive header to deny Anthony Elanga a free header on goal rising highest to deny the Manchester United striker. Brolin did brilliantly denying Wright following an excellent Smallbone knockdown. Wright’s shot was excellently struck that was met with an equally good save from Brolin.

Benjamin Nygren had an attempt on goal from the edge of the area that Maher gathered on the second attempt. Conor Noss had a chance late on to test Brolin with his effort forcing a low save from his opposition keeper.

Ireland clinched the three points right on the full-time whistle as O’Neill broke down the left and cut inside to right foot and his low shot beat Brolin at the near post to claim the win and the precious three points.