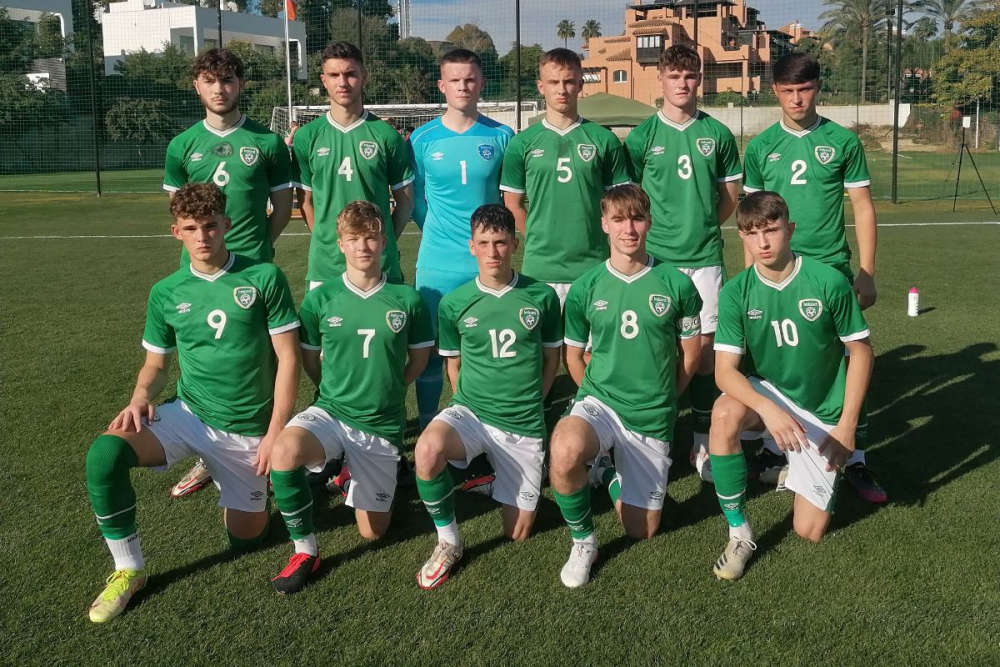 A goal deep into added time denied the Republic of Ireland Men's Under-18s victory in the first of their friendly double-header with Sweden in Marbella as they had to settle for a 2-2 on Thursday afternoon. The Boys in Green trailed at the break to a Victor Safsten header but battled back in the second period thanks to goals from Billy Brooks and Ben Quinn before Sweden snatched a late equaliser from Richie Omorowa to take a share of the spoils. Following on from their two friendlies against Hungary back in August, which ended with his side winning the first game 2-0 before drawing the second fixture 2-2, Head Coach Colin O’Brien took the Ireland MU18s to southern Spain for two games against the Swedes as he further assessed his options. After an even start, Ireland went close to taking the lead after 27 minutes but following great play down the right-hand side, Oldham Athletic’s Harry Vaughan could only poke the ball wide from a few yards out. Sweden broke the deadlock moments later when Saften headed home from a corner and they almost made it 2-0 before half-time but they were denied by the crossbar. Ireland regrouped during the interval and they deservedly levelled the scores in the 65th minute when Lincoln City’s Billy Brooks created space in the box before applying the finish from close-range. Ireland had penalty appeals waved away in the 72nd minute but they would complete the turnaround moments later when substitute Quinn swept a cross from the wing past the keeper.  The referee waved away more Irish shouts for a spot-kick in the closing stages before Quinn missed a glorious chance to seal the win and claim his second of the afternoon when he was denied by the Sweden shot-stopper as he raced through on goal. And with 91 minutes on the clock, Sweden snatched an unlikely draw when Omorowa toe-poked the loose ball past a helpless Conor Walsh from inside the six-yard box. The two sides will meet again on Sunday for their second and final friendly in Marbella with kick-off set for 14:30. Republic of Ireland: Walsh; Seary, Murphy, Curtis; Fogarty; Vata (Ferizaj 67) Vaughan, Coleman; Barrett (Quinn 67), Pearce (Lonergan 85), Billy Brooks (Edwin Agbaje 67) .
Sweden: Hamawand, Larsson, Eriksson, Henareh,  Safsten, Garcia Tsotidis, Omorowa, Danho, Eklund, Farnerud, Nordstrom.