Budget 2022: Everything You Need To Know 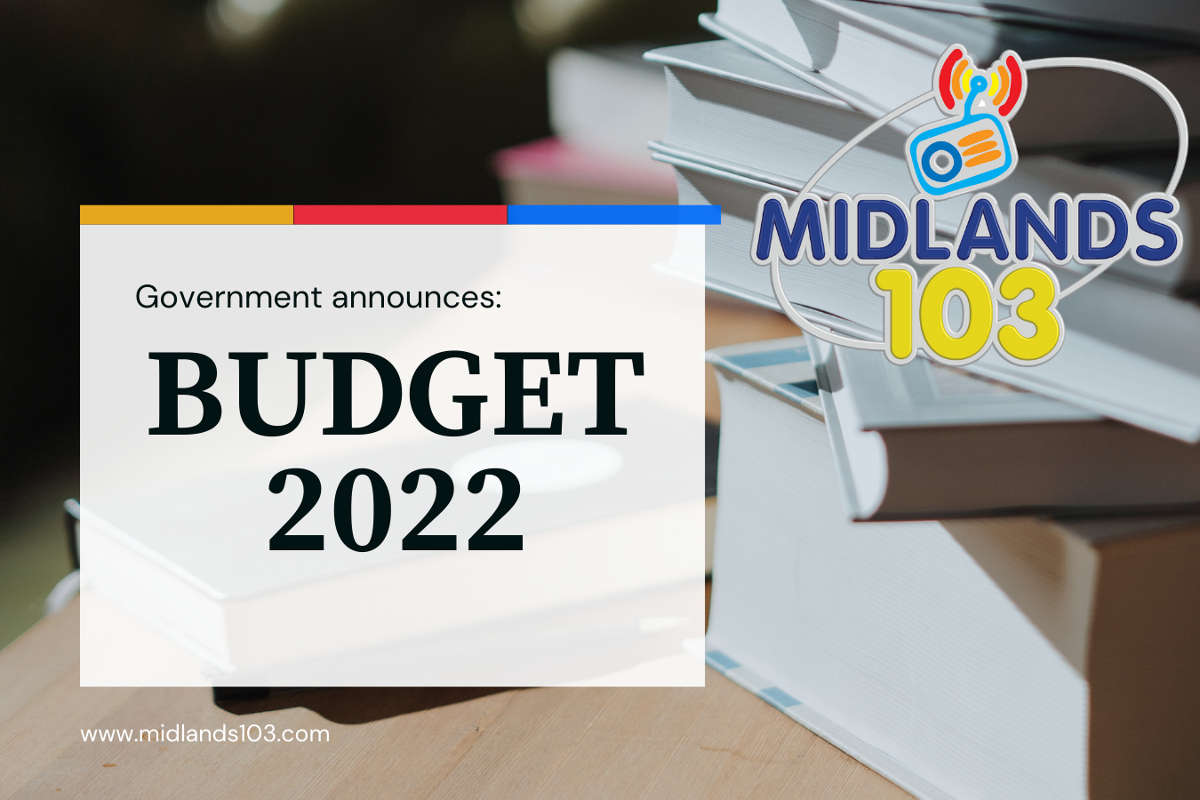 All the latest from today's Budget announcement.

Finance Minister Paschal Donohoe is on his feet in the Dáil to announce the details of Budget 2022.

The budget will see around €4.7 billion in additional spending for next year.

Keep up to date right here and we will take you through it all...

Minister Donohue says the Covid 19 pandemic was unprecedented and changed the lives of many.

He says the country is reaching for a better brighter future, while the government is conscious of the cost of living pressures.

The National debt is to come in at just under €240 billion next year, while it's expected public spending in 2022 will be €87.6 billion.

The budget deficit from Covid forecast to be €21.5 billion down from €34.5 billion.

The total budget package is €4.7 billion - €4.2 billion on expenditure and €0.5 billion in tax measures.

Revenue raising measures of €230 million in the budget.

A €4 billion euro COVID contingency fund is being created.

Tax arrangements for international air crews under Section 127B of income tax code will change.

Reduced VAT rate of 9% for hospitality sector will remain in place until August 2022.

Employees will be able to claim back 30% of vouched expenses for heat, electricity and broadband for working from home.

- rate at which people pay the higher rate of tax increased by €1,500

Finance Minister Paschal Donohoe's defending the decision to join an OECD agreement to increase corporate tax to 15 per cent.

The USC exemption for medical card holders and those over 70 earning less than €60,000 stays in place.

A Zoned Land Tax will be introduced applying to land which is zoned for housing and serviced but is not being developed.

The rate will be 3% of market rate.

It will operate on a self assessment basis and have exemptions and will replace the vacant sites levy.

20bn over the next five years being made available.

174m for direct delivery of 4,000 affordable homes next year.

Here's Minister Donohue speaking about it in the Dáil:

The Minister has announced a €520 million tax package.

That means the rate at which people pay the higher rate of tax is being increased by €1,500.

While the personal tax credit, employee tax credit and earned income credit is being increased by €50.

Pascal Donohue says this will help offset the impact of rising prices for goods and services:

The Help to Buy scheme will be retained for 2022 at current rates and reviewed next year.

€7.50 increase in the carbon tax which will be reinvested in social welfare measures on fuel poverty and a Just Transition.

Half price public transport for young people, a large increase in the number of gardaí, and subsidies for childcare are among the biggest measures.

The main weekly welfare payments, including the state pension, are to rise by 5 euro a week - along with the weekly fuel allowance.

The point at which people start to pay the higher rate of tax will rise by 1,500 euro.

While carbon taxes will also increase from midnight, meaning petrol, diesel, coal and home heating oil will be more expensive.

Modest tax disregard for personal income to households who sell surplus electricity from microgeneration back to the grid.

Finance Minister Pascal Donohoe also announced new measures to help with the costs incurred by those working from home:

Scheme extended for gas vehicles and hydrogen powered ones.

General stock relief will continue until end of 2024.

Signals next year's budget will contain 50 per cent excise relief for independent small producers of cider and other fermented drinks.

Employment Investment Incentive scheme to be extended for three years and will be opened up to more investment funds.

Relaxation of the rules around the capital investment window for investors.

Extension of Corporate Tax relief to certain start ups until end of 2026.

New tax credit for the digital gaming sector of 32% up to a limit of 25m on the design, production and testing of a game.

Excise on a 20 pack of cigarettes going up 50c with a pro rata on other tobacco products.

Minister Donohue announced the measure a short time ago.

The Government shouldn't use the budget to bully people into giving up smoking, according to a smokers rights group.

50 cent has been added to the price of a 20 pack of cigarettes.

The bank levy is being extended.

Ulster Bank and KBC will be excluded from the charge as they're leaving the market.

The Restaurants Association of Ireland says it's deeply concerned the 9 per cent VAT rate for the hospitality sector will increase next September.

Spokesperson Adrian Cummins says they will be seeking a meeting with the Finance Minister to discuss the matter.

Proposals on a pandemic bonus to be brought forward in the coming weeks.

- 90m aviation package.
- 30m for protection and renewal of roads.
- 50m ICT grants for schools.
- 60m for extension of commercial rates waiver for Q4 targeted at hospitality, arts and tourism.
- 30m for health for areas hit hard by pandemic - palliative, mental and disability.

1.6bn being invested in water services next year.

New redress scheme to be announced in coming weeks.

*
1bn for the health service in 2022 for Covid health measures. 200m of that will be held in a central contingency fund.

Core health spending is to increase by 1bn euro to a record 20.38bn. Including capital and Covid provision it's 22.2bn.

Public Expenditure Minister Michael McGrath says 20 billion euro is being invested in housing over the next five years.

Up to 7 billion euro in Covid funding will be provided in 2022, and will be available as required to continue tackling the pandemic.

Minister Michael McGrath explains what that money's for.

That brings the total to 340, it represents a rise of one third in capacity since start of pandemic.

716m investment in childcare in 2022.
- 78m extra for National Childcare Scheme.
- Linked to no increases in costs for parents.

New funding stream for 4,700 childcare providers from Sep 2022 on at a cost of 69m to improve conditions for workers.

A 250m euro fund to tackle waiting lists has been announced.

*
28m for ending direct provision in line with white paper.

*
A dedicated women's health package worth 31 million euro has been announced by the Public Expenditure Minister Michael Mc Grath.

- 60m for aviation for a number of capital and grant schemes.

The number of staff in the health service will increase by 6 per cent next year, according to Public Expenditure Minister Michael McGrath.

*
3,320 additional CAO places as part of a 68m investment in higher education.

35m for cost of going to college.

The SUSI grant will be increased by 200 euro and changes to who can get it.

200 euro fee for post leaving cert courses will be scrapped.

5 euro a week for working age welfare payments including 5 euro for young jobseekers.

Increase in Qualified Children rate for u12s by €2 and over 12s by 3 euro.

5 euro a week is being added to the state pension.

There's also a 3 euro a week increase to the living alone allowance.

Minister Michael McGrath says this will help protect the most vulnerable citizens into the future.

A record 716 million euro is being invested in childcare next year.

Parents benefit increase by 2 weeks to 7 weeks from July next year.

10 euro on the back to school allowance.

10 euro on the working family payment.

Domiciliary Care Allowance from 3 to 6 months.

Rate of wage subsidy scheme for disabilities will rise by a euro a week.

Earnings limit on disability allowance from 350 to 375.

Reducing number of contributions for treatment benefits from 260 to 39 weeks.

100% christmas bonus to be announced.

Minister McGrath has announced an increase in the Susi grant for students.

Doubling of the ex-gratia funding for animal welfare organisations as part of 1.85bn programme for Ag and the Marine.

376m programme for rural Ireland including 4m for the SICAP programme.

6.7m for a youth justice strategy to tackle anti-social behaviour.

Package on domestic and sexual violence including extension of legal aid for victims and funding awareness campaigns.

A package has been announced on tackling domestic and sexual violence.

It includes the extension of legal aid for victims and funding awareness campaigns.

Minister Michael McGrath says these crimes need to be dealt with seriously.

Free contraception for young women has been welcomed.

*
The main weekly social welfare payments, including the state pension, are to rise by 5 euro a week.