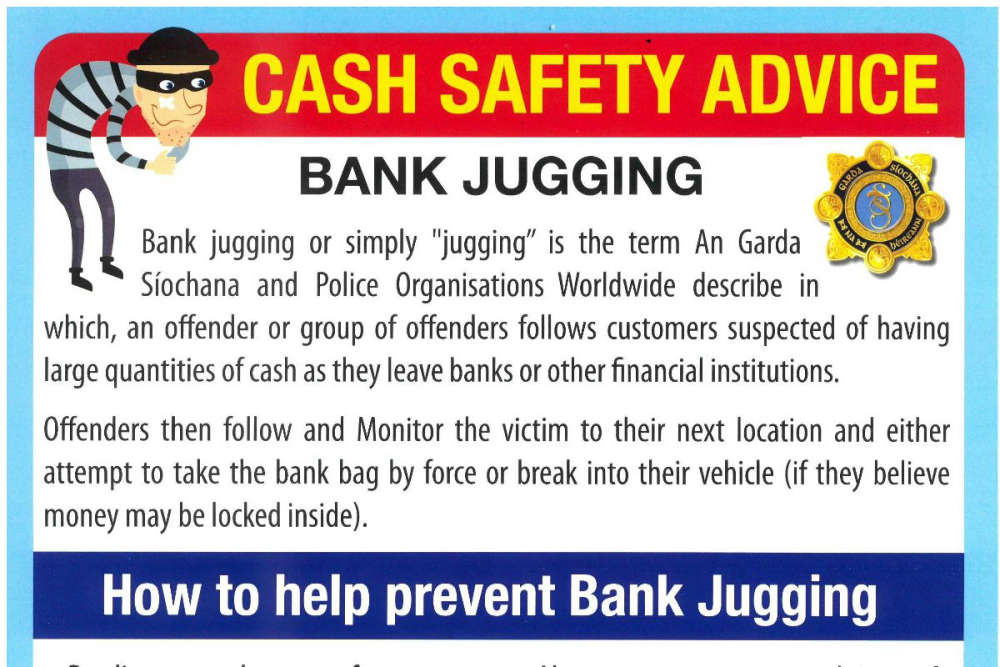 They've issued several pieces of advice on the matter.

Gardai are warning people to be careful carrying large amounts of cash over the Christmas period.

They're warning of a trend called 'jugging' where people are being watched and followed as they leave banks with large amounts of cash, and then may be the victim of distraction theft.

Gardai say three men were arrested last month in connection with this type of crime, and over 110-thousand euro in cash was recovered in the operation.

Full statement from An Garda Siochana on the matter:

Although many personal commercial transactions now take place with cards or electronically, in the run up to and over the Christmas period people may be in possession of larger amounts of cash in their homes.

Bank ‘Jugging’ is a theft method where customers of financial institutions are watched by persons who wait for them to come out of the financial institution with a bank bag, coin box or bank envelope that looks like they may have a large amount of cash.  The customer may then be followed with the thief looking for an opportunity to steal the cash, maybe by breaking into their car or a distraction theft from the victim directly.

An Garda Síochána have been targeted Criminal groups involved in this type of crime.  In a recent operation, 3 males were arrested at the end of November 2021 and subsequently charged with multiple offences before the courts.  These males are currently remanded in custody. During the course of that Garda operation, the contents of a number of Bank Accounts were frozen and €110,000 Cash was recovered.

If you are carrying out cash banking transactions please take the following  general advice: