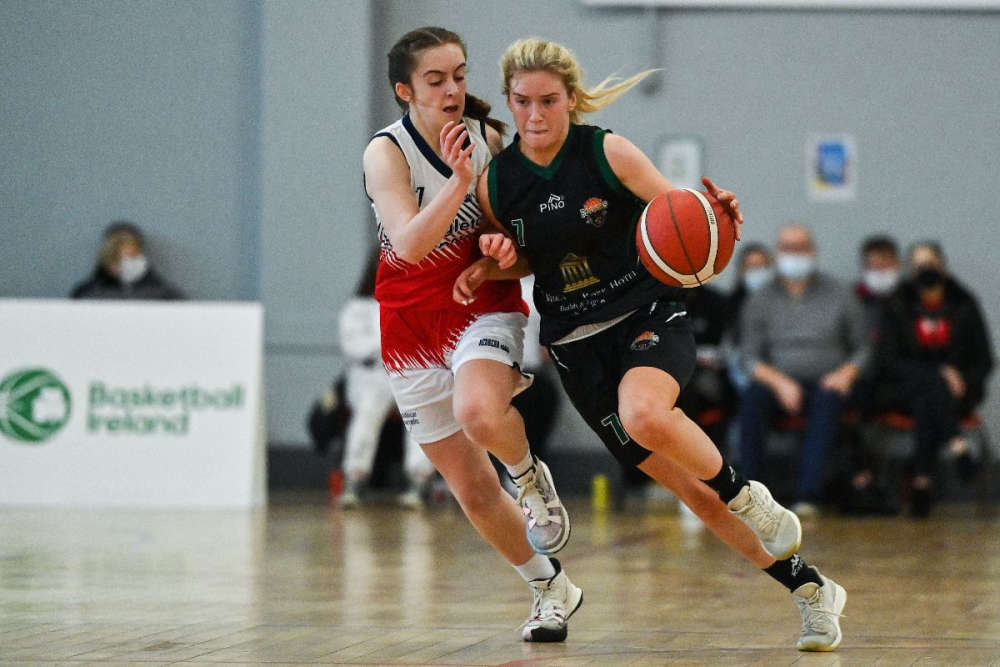 It takes place on Sunday week.

Portlaoise Panthers now know the details of their U-20 National Cup final appearance.

Basketball Ireland have announced that it'll take place on Sunday January 23rd, with further details and ticket allocations for fans yet to be finalised.

A venue also hasn't been confimed but it looks as if all finals that weekend will take place at the National Basketball Arena in Dublin.

The Panthers reached the occassion by beating Brunell in Cork by 49-37 yesterday. Sarah Fleming top scored for the Panthers with 11-points in that one.

It was Portlaoise Panthers who won the tip-off, but an offensive error led to a turnover and it was Singleton SuperValu Brunell who got the opening score of the game as Emily Peyton Blake sunk a free throw. Kelly Sexton started aggressively for the home side, forcing turnovers at the point and grabbing rebounds on both ends. Shauna Dooley encouraged her Portlaoise Panthers teammates to communicate as they worked to defend while Brunell continued to attack the basket.

Portlaoise fought back with baskets accumulated from Shauna Dooley and Lisa Blaney, as they continued to split through the Singleton Supervalu Brunell defence. Irish senior international and assistant coach, Edel Thornton, made her presence through her encouragement of her players from the sideline and in making the necessary adjustments to counteract the midlands opposition.

Former Ireland U16 internationals Rachael Lynch and Issy McSweeney made a great impact in the second quarter as Singleton SuperValu Brunell pushed the tempo. Katie Power brought the sides level with a steal and a converted three-point play, and the momentum shifted to the home side after a three-pointer from captain Mia Finnegan.

Head coach Aaron Dooley instructed his team to remain composed as baskets from Lisa Blaney and Shauna Dooley kept them in the lead. Portlaoise Panthers' superb passing opened up gaps in the Brunell defence, as they continued to make the right passes throughout the second quarter. Brunell finished the quarter strongly, leading 31-27 at the half-time break.

A three-pointer by Sarah Fleming opened the second half and a shot clock violation from the home side had the Portlaoise Panthers supporters on their feet encouraging their team towards victory. Lisa Blaney added some defensive pressure on Issy McSweeney, who did her best to start the offence for the home side.

A timeout energised the home team, as Kelly Sexton executed a reverse layup and forced Portlaoise Panthers turnovers. Issy McSweeney’s defensive efforts earned an exuberant high five from teammate Natasha Bowdren. Despite Singleton SuperValu Brunell’s strong start, Portlaoise Panthers maintained their lead as they continued to execute on defence, and they led by six points at the end of the 3rd quarter.

The final quarter continued to be a tight affair as McSweeney continued to be aggressive on the defensive end, stealing the inbounding pass. An athletic finish at the basket by Lisa Blaney quietened the home crowd however, as the opposition maintained their lead. The Portlaoise crowd certainly made their presence felt, with their calls for defence acting as the sixth man for the away team. Injuries started to pile up for Singleton Supervalu Brunell, as Issy McSweeney and Lauryn Homan needed time to recover.

A huge block from Jasmine Burke brought the Portlaoise Panthers supporters to their feet. The closing minutes proved exciting as both teams pushed the tempo and gave it their all. Brunell struggled to score and converted only four points in the final quarter.

Portlaoise Panthers continued to move the ball and ran the clock down to the delight of their supporters.

The game itself will be streamed on the Basketball Ireland Youtube Channel.

Full details are as follows: