Find out more about the Hurling and Football competitions.

The GAA have confirmed the details of both the Leinster Hurling and Football Championships should they go ahead.

Both the Laois hurlers and Westmeath footballers will have televised games.

A large cloud remains over the All-Ireland series in either code being completed, but that hasn't stopped the GAA from releasing dates, times and venues for the provincial championships.

If successful they'll be back in HQ seven days later to face Kilkenny.

Mike Quirke's footballers have to wait until November 8th to face either Longford or Louth in a quarter-final.

That will take place in either Tullamore or Longford depending on the opposition.

Offaly welcome Carlow to Tullamore for a 1:30 throw in on November 1st in the opening round.

Assuming the games go ahead as planned, which is something we’ve been looking forward to for months... it would be a sensible move for the GAA to reduce the burden on teams travelling long distances, and avoid all hot spot counties by playing games in suitable neutral venues.

While Westmeath meet All-Ireland champions Dublin a week later in Portlaoise for a 6:15 throw in, in the opening football quarter-final.

That game will also be televised on Sky.

Should Offaly overcome Carlow, they'll also be in action that weekend November 8th against Kildare in Portlaoise at 5:30. 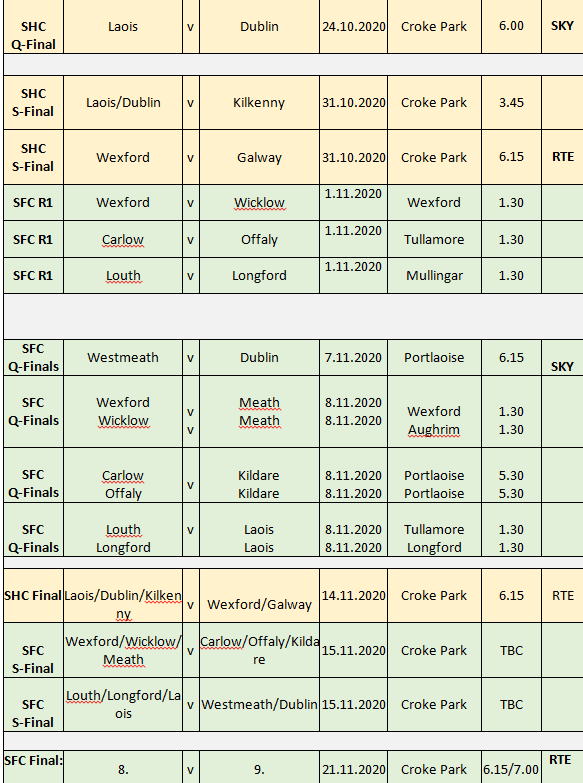