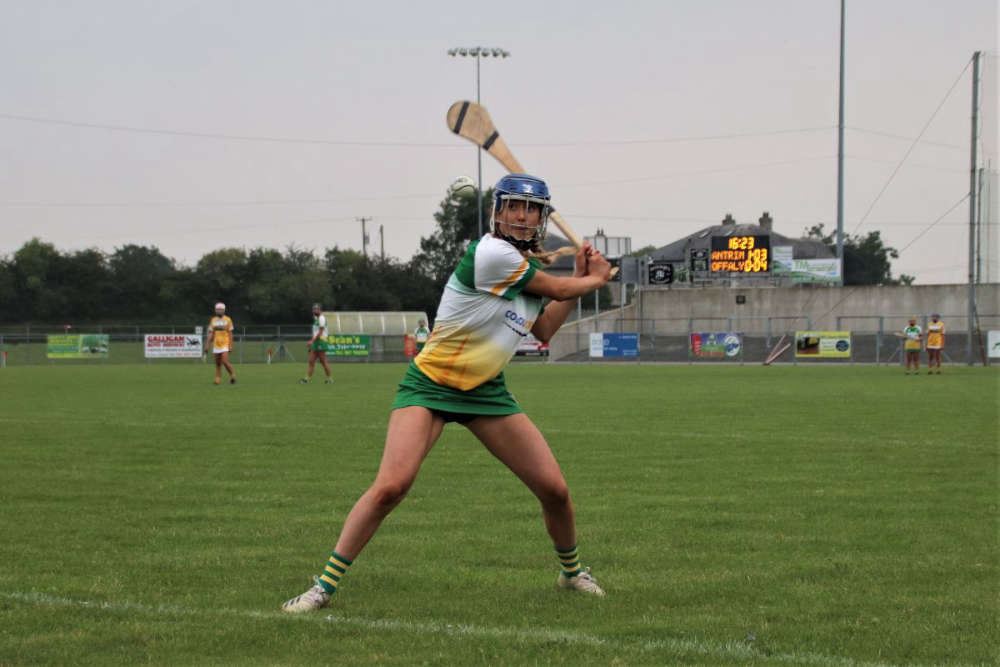 It was honours even between the two in Monaghan yesterday.

Offaly and Antrim qualified for Sunday’s All Ireland Final after both had come through their campaigns unbeaten and scoring an impressive 25 goals between them in their 5 games and one wondered if the Final would make for a match where both would continue their impressive scoring.

The match was played in Inniskeen Grattans GAA Grounds in Monaghan which no doubt left Offaly supporters glad of the aid of Google Maps to help them find the grounds.  Before throw in Offaly announced two changes to their starting team with both Sarah Doherty and Cayla Fletcher replacing Chloe Hennessy and Aoife O’Regan.

Once referee Mike Ryan of Tipperary got the game underway it was natural that both sides would be nervous given the occasion and Antrim showed this by hitting two wides in the space of the first 2 minutes.

Sharp shooter, Clodagh Leahy opened the scoring for Offaly with a monster point from near the sideline.  Antrim however, were quick to respond with a point from a free by the impressive Áine Magill which skimmed the crossbar.  Offaly’s second point of the match came from a free won by Sarah Fitzgerald.

Leahy hit a long range free that dropped into the hands of Grace Leonard who pointed without hesitation. In the 7th minute Antrim’s, Eavanne Martin gave her team a massive lift when she fired the ball to the back of the Offaly net.

The Antrim girls seemed to be that little bit sharper than their opponents in the opening stages, but Offaly’s defence applied a lot of pressure on the Antrim forwards and overturned a lot of possession.

Offaly’s work rate was rewarded with Clodagh Leahy pointing two frees just before the water break, to leave things all square at 0-4 to 1-1.

After the water break Antrim got off to a flying start scoring three points unanswered.  10 minutes after the break Offaly showed great teamwork with Sarah Fitzgerald bursting out of defence and working the ball through to the forward line and Chloe Fogarty converting for her team.  Offaly got the final score before half time with a point coming from a free by Clodagh Leahy to leave the minimum between the teams at half time.

And it’s finished level here and we’ll now have a replay pic.twitter.com/PCcHmiDxZd

After half time, Offaly seemed to improve and settled more into the game.  They outscored their opponents by 4 points to 1 in the third quarter with Leahy hitting two frees and Chloe Fogarty and substitute Hannah Riley getting their names on the scoreboard and the Offaly supporters were now in full voice with cheers of Uibh Fhaile ringing around the ground.

After the break and Offaly were playing continuing to play confidently and added a brace of points with Drumcullen’s Clodagh Leahy adding to her tally from two frees.  With a four point lead the Offaly team seemed to withdraw and defend their lead, inviting Antrim onto them and Antrim reduced the deficit when they hit two quick points.  Antrim's tails were up at this stage as they attacked Offaly and they were rewarded with an excellent goal from tally’s woman Aine Magill and with time running out Offaly now found themselves down by a point.

However, the Faithful girls showed that they are made of stern stuff and were in no mood to let Antrim walk away with the spoils and with just seconds to go Offaly’s joint captain Sinead Hanamy hit over the equaliser and force a replay.

Offaly will have mixed feelings about a draw.  While they seemed somewhat sluggish in the first half, they upped their game in the second half but with Antrim snatching that late goal they will be happy to have another go at the Final.  Details of the replay have not yet been confirmed but these will be announced on the Offaly Camogie social media channels when they become available.