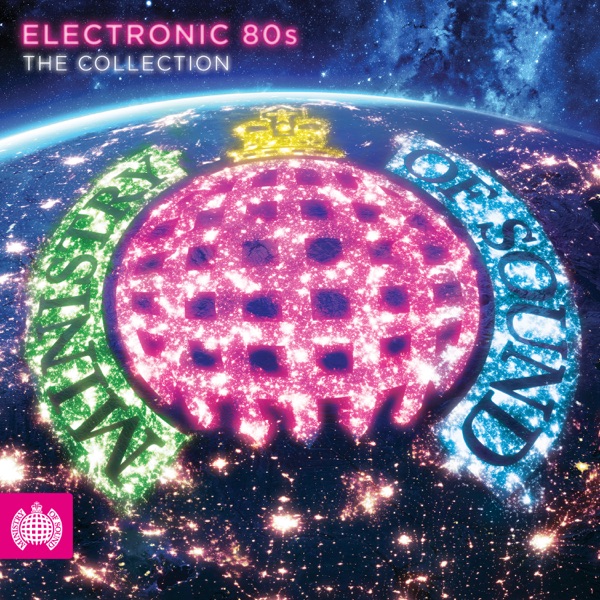 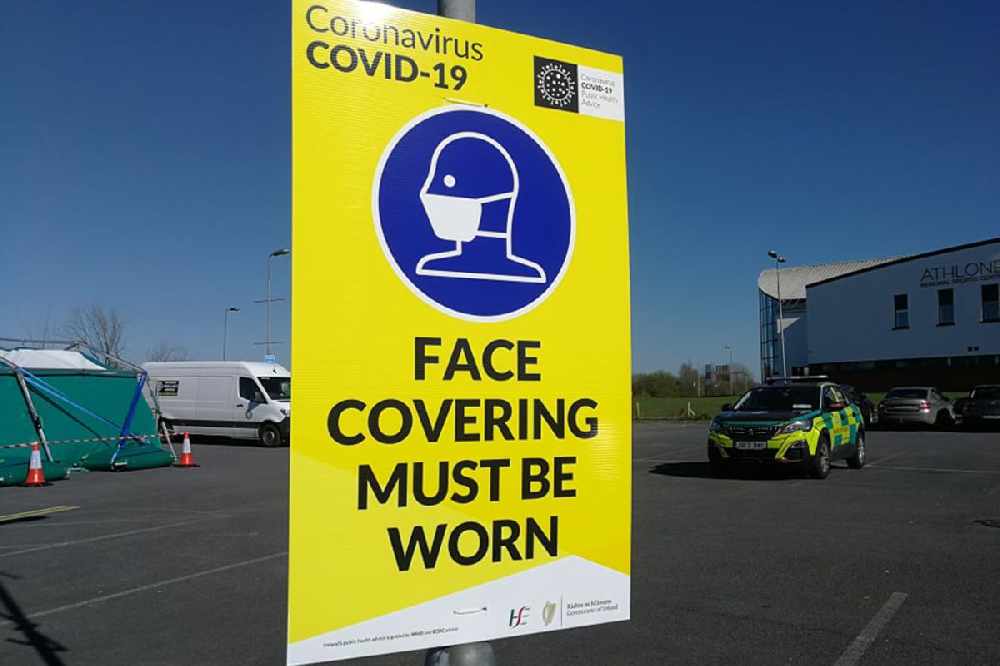 The Health Protection Surveillance Centre has today been notified of 10 additional deaths related to COVID-19.

7 deaths occurred in April, 1 in March, 1 in February and 1 in January.

There has been a total of 4,866 COVID-19 related deaths in Ireland.

As of midnight, Wednesday 21st April, the HPSC has been notified of 617 confirmed cases of COVID-19.

As of 8am today, 176 COVID-19 patients are hospitalised, of which 48 are in ICU. 19 additional hospitalisations in the past 24 hours.

Dr. Tony Holohan, Chief Medical Officer, Department of Health said; “We are in a strong position in that transmission levels have reduced substantially and the roll-out of vaccination is protecting more and more of those at risk from the severe effects of COVID-19.

“If we can maintain our current position there is hope that we can look forward to a real easing of measures, but it is as important as ever that we don’t put that progress at risk by letting our collective guard down too much, or too early.”

Professor Philip Nolan, Chair of the NPHET Irish Epidemiological Modelling Advisory Group said; “The R number is estimated as being very close to 1.0. We continue to keep close contacts at 2.6 – a phenomenal testament to the public in keeping social transmission low. All indicators of the disease are stable or declining slowly, though we may see an increase in cases over the coming days. Maintaining this over the coming weeks is key to managing community transmission, and a move towards easing of measures.”

Professor Martin Cormican, Clinical Lead for Antimicrobial Resistance and Infection Control, HSE & Professor of Bacteriology at NUI Galway said; “The benefits of vaccination in Nursing Homes and long-term residential care facilities are now very clear with a dramatic drop in the number of residents and staff developing severe disease.

“New visitation guidance agreed by NPHET today represents another step to support residents in long term residential care facilities in maintaining meaningful relationships with their family and friends.  From the 4th May, nursing home residents - in which most residents are fully vaccinated - can expect 4 visits with 2 people per week.” 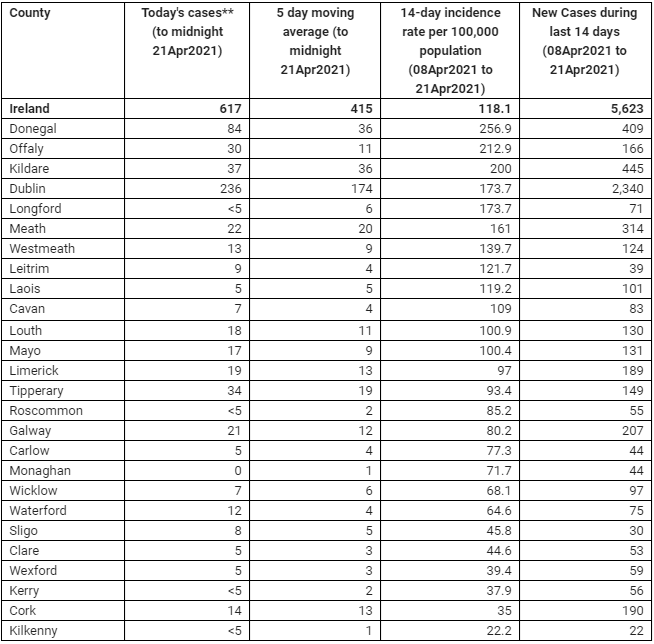 ~The 5-day moving average of the number of new cases provides an appropriate indicator of current daily case numbers within a county. It takes account of any validation of cases for previous days and smooths out daily/weekend fluctuations in case numbers.

85 percent of people are not confident the majority of the population will receive a Covid-19 vaccine by the end of June.

A survey carried out by Zahra show that 59 percent admit they are enjoying life in lockdown.

More than 4,000 people took part in the study with 72 percent saying they have started to shop locally more since the beginning of the pandemic, while almost a third say they are spending more on groceries as they "need something to enjoy".

Ireland was one of only a few countries in Europe which actually recorded an increase in road fatalities in 2020, according to new statistics from the EU Commission.

Road deaths in Europe as a whole decreased by an unprecedented 17 per cent, with far fewer people making journeys because of COVID lockdowns.

New figures show that Ireland recorded 30 deaths per million of population last year compared to 29 per million the previous year, an increase of six per cent.

Hairdressers and barbers will be prioritised for re-opening next month, along with places of worship.

Last night the Taoiseach wrote to church leaders telling them the government was giving "positive consideration" to allowing them to open next month.

He didn't commit to a date, but said potentially from as early as May 4th.

Micheál Martin separately told his party barbers and hairdressers would be given priority for re-opening - while click and collect and non-essential retail will also be examined.

Tánaiste Leo Varadkar told Fine Gael's parliamentary party meeting the June target for getting 82 per cent of people a first vaccine can still be reached.

But he said supply issues and vaccine apathy could hinder this.

He stressed it's important 80 per cent of the population is fully vaccinated before the winter.

His meeting heard strong criticism of Health Minister Stephen Donnelly for his handling of several issues, including the vaccine roll-out.

Former Minister Michael Ring was scathing of Minister Donnelly's performance, and asked Leo Varadkar to discuss it with the Taoiseach.

Sources present say there were a lot of nodding heads on the Zoom call as the comments were made.

The Taoiseach provided an update to his own party, and said the EU is now working on purchasing extra vaccines for use between now and 2023 as booster shots or to combat variants.

The National Immunisation Advisory Committee will meet today to consider whether to roll out the Johnson and Johnson vaccine here.

It's after the European Medicines Agency found a possible link between the Covid-19 vaccine and very rare blood clots - but said the benefits outweigh the risks.

Public health expert, Professor Gabriel Scally, believes NIAC will decide to use it on all age-groups - and not just over-60s, like the AstraZeneca injections:

12 public hospitals now have fewer than three Covid-19 patients each.

The total figure last night was 172 - the same as 24 hours earlier, and the lowest since last October.

47 Covid patients are in intensive care, while 401 new cases and 15 deaths were reported yesterday.

Family members of Pfizer's staff in Ireland will be offered the Covid-19 vaccine, under an independent programme.

The company says the doses are separate to the supply provided to the government for the general population.

Immediate family and household members of staff over 60 will be offered the jab first from mid-May.