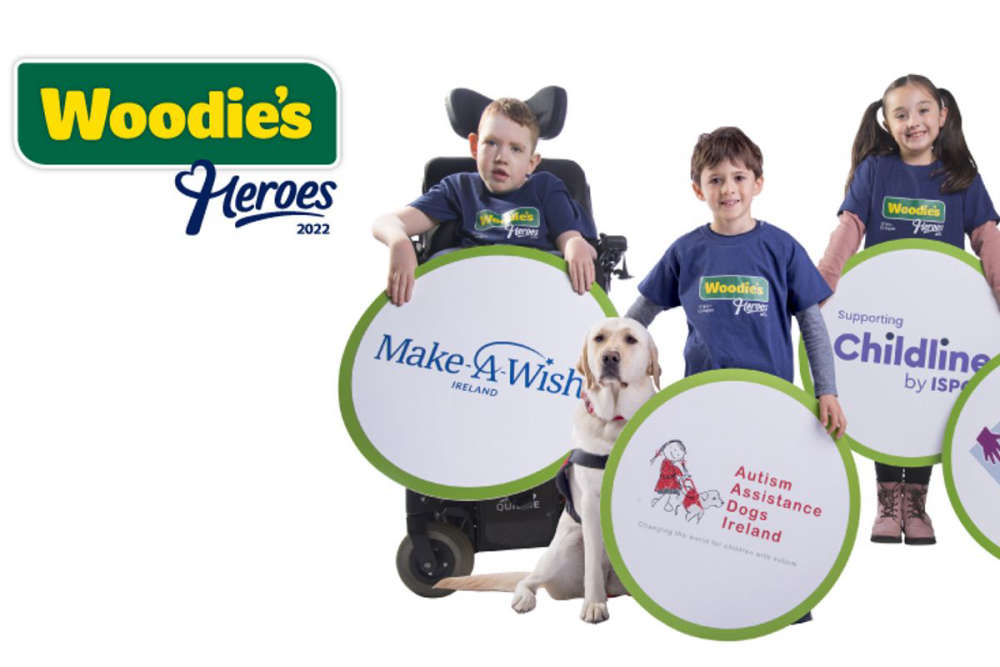 The annual Heroes campaign is getting underway this weekend.

Woodie's is hoping it will be its biggest and best year of fundraising to date so that it can help four heroic Irish charities continue their incredible work.

The campaign kicks off from Sunday 17thJuly, running all the way through to Saturday 13thAugust and will support ISPCC Childline, Autism Assistance Dogs Ireland, Down Syndrome Ireland, and Make-A-Wish Ireland.

Each charity has been carefully selected using a colleague vote shared with all 1,600+ Woodie’s colleagues earlier this year.

In 2021, Woodie’s Heroes surpassed its target and raised over €536,000 for children’s charities. This summer, Woodie’s hope to continue to build on their fundraising efforts, thanks to the generosity of their customers and suppliers, and the support and enthusiasm of Team Woodie’s. 100% of all donations goes directly to the four charities and will be divided evenly among them.

It is now easier than ever to donate to Woodie’s Heroes:

Two teams of Woodie’s Heroes cyclists will also undertake a 2,000km cycle around the country over six days in August, putting in the hard miles for a wonderful cause. The teams will each cycle 1,000km and visit all 35 Woodie’s stores and collect their fundraising cheques for the charities.

Woodie’s CEO Declan Ronayne said: “It’s hard to believe we are back with Woodie’s Heroes for a seventh year! We understand that the current climate has been hard for the charity sector and that our chosen charities need our help. To date, Woodie’s colleagues have raised over €2.5 million for Irish children’s charities with their drive, passion and enthusiasm – I have no doubt that 2022 will be our best year yet!’

See below for the remarkable stories of the four charities and their ambassadors who will be greatly helped by the Woodie’s Heroes campaign:

Rueben from Co Kildare is the third of three boys in a very busy household! His speech was delayed when he was younger, but as he is from a bi-lingual family, they thought that this was the reason for the delay. After a series of assessments, it was confirmed that Rueben had autism.

COVID arrived shortly after Rueben’s diagnosis, which proved really challenging. Walking was the only activity and as Rueben would often bolt, he became a flight risk. With sensory issues of getting wet, their worst fears were realised on one rainy day, when he reacted to getting wet by running out of the estate, across a busy road as a truck came towards him. It missed him by a matter of inches.

This was the moment that Rueben’s mum Sara realised autism was now a major threat to his safety and reached out to AADI to apply for an assistance dog. The waiting list had been closed since 2014 and when it opened, they were fortunate enough to be one of the 30 places allocated, all of which were filled in less than two minutes.

Eventually Indi was matched with the family and arrived November 2021. Indi has revolutionised life for Rueben and his family in so many ways: Rueben doesn’t and can’t run away now, his speech and self-esteem have improved, he has much more independence and he can even go to the shops and supermarket with his mum, which was impossible until Indi’s arrival.

The funds raised by Woodie’s Heroes will enable AADI train more dogs than ever before in 2022, expanding their Puppy Training Programme to add 25 puppies and foster families to the programme. One in 65 children has autism. It takes €22,000 and up to two years to train each autism assistance dog to the standard required. Sadly, demand vastly outstrips supply with at least 10 enquiries a week from desperate parents.

The family often use ‘Lámh’, sign language, to communicate with Dara using his hands. There are over 500 signs and Dara has his favourites that he uses to let the family know what he is looking for.

Early intervention is critical for children with additional needs, especially those with Down Syndrome. With the right supports in place, they have more chance of developing their skills and reaching their potential. At the moment, the waiting lists are really long for Speech & Language Therapy - even if a family choose to go through the private system, it is very hard to get an appointment.

Jason (11) from Galway was born with Congenital Myopathy, which is a rare disease that causes muscle weaknesses, which effects his lungs and his spine. At just 11 years of age, Jason has already had 20 surgeries on his back. Jason’s schedule consists of constant physiotherapy, OT, and dietician appointments.

Make-A-Wish Ireland has one simple aim – to grant the wishes of children with life-threatening medical conditions, bringing hope, strength, and happiness. Jason loves animals: sharks, tigers and lions are his favourite. He loves watching The Zoo on RTE. While watching it he said, “I would love to do that” and mum, Michelle, got in touch with Make-A-Wish Ireland to see if they could make it a reality. The Wish team started to talk to Jason about what his perfect day as a Zookeeper would look like in order to ensure he got up close and personal with the animals and got to see them in a way you couldn’t on a regular zoo visit.

Last summer, Jason got to be a zookeeper for the day at Dublin Zoo. It was 2 days before he was going in for a big surgery and it was great for the family to have something positive to focus on and look forward to during a stressful time. Dublin Zoo made sure that the day was really special for Jason and his family. After the tour, Dublin Zoo gave Jason a zookeeper cap that he wears all the time, a tangible reminder of his wish day.

Mum, Michelle told us that the impact of his wish was incredible. “Jason had major surgery two days after the Wish experience and you could just tell he was still on a high from his day at the Zoo as he wasn’t a bit nervous going into the hospital like he normally would be. He loved being able to tell all the doctors and nurses about his zookeeper experience”.

There are over 200 children living with life-threatening illness on the Make-A-Wish waiting list for their wishes to be granted. The funding raised by Woodie’s Heroes will go a long way to reduce this waiting list and make their long-term Wish become a reality.

John has been volunteering with Childline since 2019. The listening service that Childline offers was what drew his attention – ‘I’m there to listen to the children, I don’t need to have all the answers for them, you’re a voice at the other end of the phone that gives the time and listens to what they have to say’. Childline is unique in the service that it offers children; they provide a safe space for children to talk that is free from judgement, it’s confidential, and it’s free.

The calls John receives at Childline will vary across lots of topics. It could be something small like like a lost toy! But they tackle bigger, more serious issues too like mental health, grief, or illness - the range is drastic. ‘Kids are kids and they come out with all sorts, it can be really funny and light, but it can be hard too’. During COVID, volunteers at Childline identified a lot of sadness from children who felt they were missing out on normal life, like school or occasions like birthdays. There was a lot of anxiety around the uncertainty at the time and Childline were a voice to listen to these worries during challenging times.

The volunteers at Childline won’t offer advice or tell a child what they should do, but instead they empower them to explore it themselves and help them to find their own answer. They might ask the child ‘what do you want to see happen?’ and empower them to envision what they want for the future.

Childline are always there to take a call from the children that need someone to listen, no matter what time or day it is. ‘The reality is that your problems don’t run a 9 – 5 and neither does the urge to chat. We have a steady stream of contacts throughout both the day and night’ says John, ‘when ending a call with a child, I remind them that we are here 24/7 and invite them to call at any time they need us’. The support from Woodie’s Heroes will help Childline to ensure that their listening service remains open 24 hours a day, 7 days a week.