FAI Announce Landmark Partnership With Sky For Women's Senior Side 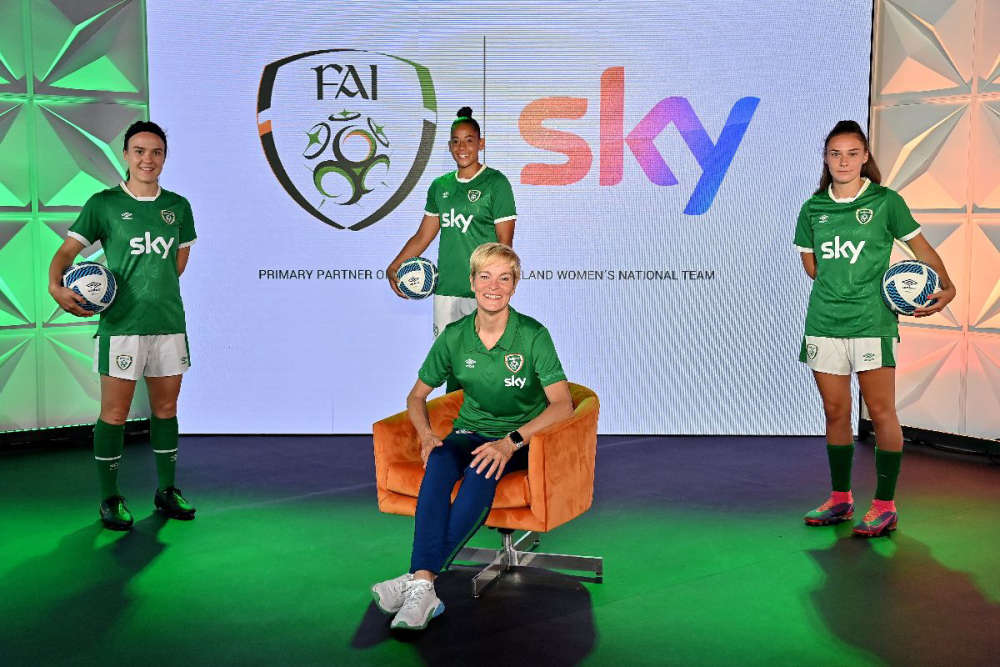 It's reportedly worth a six figure sum.

The F-A-I have announced a landmark partnership with broadcast company Sky.

The deal is reportedly worth a six-figure sum to the FAI and will see Sky become the standalone "Primary Partner" of the Republic of Ireland women's team.

The four-year deal will run for two major tournaments - the 2023 World Cup in Australia and New Zealand and the 2025 European Championship.

“This is a momentous day for the whole team at Sky Ireland and one that we are exceptionally excited about. We have been looking forward to announcing this partnership and we are honoured to be the first-ever, stand-alone Primary Partner of the Women’s National Team.

“This squad is made up of incredible people who have broken through barriers, both on and off the pitch. They are, and will continue to be, an inspiration to people of all ages right across the country. As their partner, it is so important that we spotlight and celebrate this squad and their achievements – that’s what this partnership is all about.

“We were delighted to see the FAI’s equal pay announcement last week, and as Primary Partner to the team, we look forward to doing everything we can to support them over the coming years.”

A partnership that works 👉 FAI + @SkyIreland

🗣 "Sky is a serious brand & organisation and this is real affirmation of what we are trying to do at the FAI in terms of football for women & girls"
#SkyWNT | #COYGIG pic.twitter.com/NnfEWtho9C

“The significance of this partnership announcement is testament to the dedication of every one of the players and backroom staff members for what they continue to achieve, on and off the pitch.

"The support of a brand like Sky, as we turn our focus to the 2023 FIFA World Cup, is hugely exciting. Everyone involved with the Ireland squad are thrilled to welcome Sky to our team, and we look forward to working with them.”

“On behalf of the FAI Board and myself, we are delighted to announce Sky as Primary Partner of the Women’s National Team. This is yet another really positive step forward for women’s and girls’ football in Ireland and comes on the back of our historic announcement on equal pay last week.

“Football for women and girls is a core focus within our FAI Strategy and this truly is a landmark announcement for the FAI. Partnerships like this are exactly what will help us to grow the women’s game and ensure opportunities for younger generations to come and indeed, to persuade more women to get involved in the game full stop – be it as coaches, administrators or players. I want to thank JD Buckley and the Sky Ireland team for understanding and supporting that vision.”

The Republic of Ireland Women’s National Team will welcome Australia to Tallaght Stadium on 21st September before commencing World Cup action against Sweden at home, on Thursday 21st October.