Graham Ford Steps Down From Role With Cricket Ireland 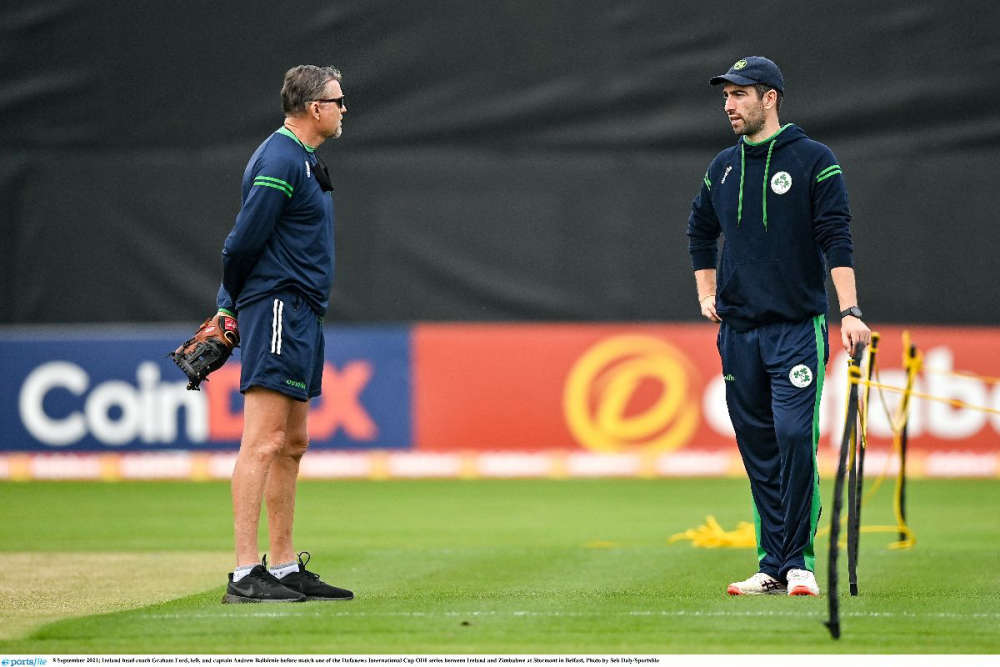 Ford was appointed as men's head coach in 2017.

Ireland Men’s head coach Graham Ford will step down from his role and will leave Cricket Ireland in December.

Ford was appointed Head Coach in late 2017 on initially a three-year deal, which was extended by three years in 2019, and has been instrumental in overseeing the generational transition of the senior men’s squad, leading the players through its introduction to Test cricket and guiding Ireland to the Men’s T20 World Cup this year. In addition to the day job, Ford also provided insight and guidance on the restructure of the men’s inter-provincial structure and the regional performance coaching hubs.

He has worked tirelessly in managing the international squad through the challenges of the pandemic, spending countless hours on the road ensuring he could spend quality coaching time with the players during difficult, uncertain, and restrictive circumstances.

Ford’s decision will see him step down from coaching duties immediately, however, he will go on leave as he sees out his contractual notice period, which will take him into mid-December.

Ireland Men played 102 international matches during Ford’s reign (51 T20Is, 47 ODIs, 3 Tests, and 1 List A match), and while an incredibly determined and competitive coach across all formats, he once cited Ireland’s debut men’s Test match against Pakistan at Malahide as his proudest moment in Irish colours.

Speaking from his home in Dublin, Ford said:

“The last four years have been very special for me - I have enjoyed many happy days with a cricket squad made up of very special people. I have also enjoyed watching club cricket and experiencing the passion and club loyalty of many fine cricketing people.

“When compared with the other ICC Full Member nations, Cricket Ireland has faced many handicaps and challenges. Despite this, on several occasions the team has competed impressively with some of the top teams in world cricket and it has been a privilege for me to experience first-hand the character and togetherness of the Irish players.

“However, over a period of time these challenges and handicaps have taken their toll on me. After much consideration and discussion with my family, I realise that this is the right time for me to step away from Cricket Ireland.

“I’d like to end by thanking all the players and the support staff for their impressive attitudes and loyal support during the four years and I look forward to watching them achieve big things in the future.”

“Graham has been one of the best coaches I have ever worked with, and I feel very fortunate that I got to spend four years working with him, not just for the playing development side of my game, but for his incredible support during my captaincy to date.

“We have had our challenges over the last number of years as a squad, but his consistent positivity has been infectious and his determination to improve the skills of everyone in the squad has brought some of our young cricketers on leaps and bounds. I think more important than anything is that Fordy is a brilliant person and one that will be greatly missed in and around the squad, and on behalf of the group of players we wish him nothing but the best in the future."

“It is a sad day to see Graham bid farewell to Cricket Ireland – he is a truly world-class coach who has incredible respect within the game, both for his achievements on the field and his work in developing players off the field. We have been very fortunate to have had the wisdom and guidance of Graham through the last four years and we wish him well as he leaves the Irish game for now.

“It would be sugar-coating the occasion to not acknowledge the challenges that Graham has faced – in many respects, unprecedented challenges. The physical and mental impact of the pandemic has been much talked about regarding players, but the coaches and support staff are equally impacted by circumstances. In fact, you could almost say it can have a greater impact on those within leadership positions in a squad as they often bear the weight of those who are under their guidance, as well as their own personal struggles. Graham has been a stoic coach, mentor and support for a squad of players dealing with extremely demanding circumstances. And, as he admits himself, it has taken its toll and he needs a break from the game.

“I know, from working closely with Graham, that the difficulties of managing his workload during the Covid pandemic has been particularly taxing - the constant travelling around Ireland to train with players, lengthy periods living within bio-bubbles, and the burdens of coaching for large periods under travel restrictions and a recruitment freeze which prevented us from hiring coaching support to name but a few challenges. No one will truly know or appreciate how many hours Graham put in taking one-on-one sessions with senior players during Covid – such was his commitment and desire to not see the development of a crop of young players stunted by the pandemic’s restrictions.

“He has barely taken a day off voluntarily in his four years here, such is his commitment, and probably hasn’t had a sustained break from the game for well over two decades. The pace, relentlessness and increasing pressures of international cricket – compounded by the impact of the pandemic - are such that we fully understand and appreciate Graham’s position. Personally I shall miss him greatly, and while disappointed that we will lose him, I can’t but respect that Graham is putting his mental health, physical health and family first at this time.

“We wish him well and hope the break from the game is what he needs to rest, recover and recharge before charting his next course in life – hopefully, in cricket.”

The senior men’s squad is due to leave for a tour of the USA next month, followed immediately by a white-ball series against the West Indies in January. Interim coaching plans will be put in place over the coming weeks, while a longer-term plan is developed, which will take into account any recommendations from the current T20 World Cup Review underway.