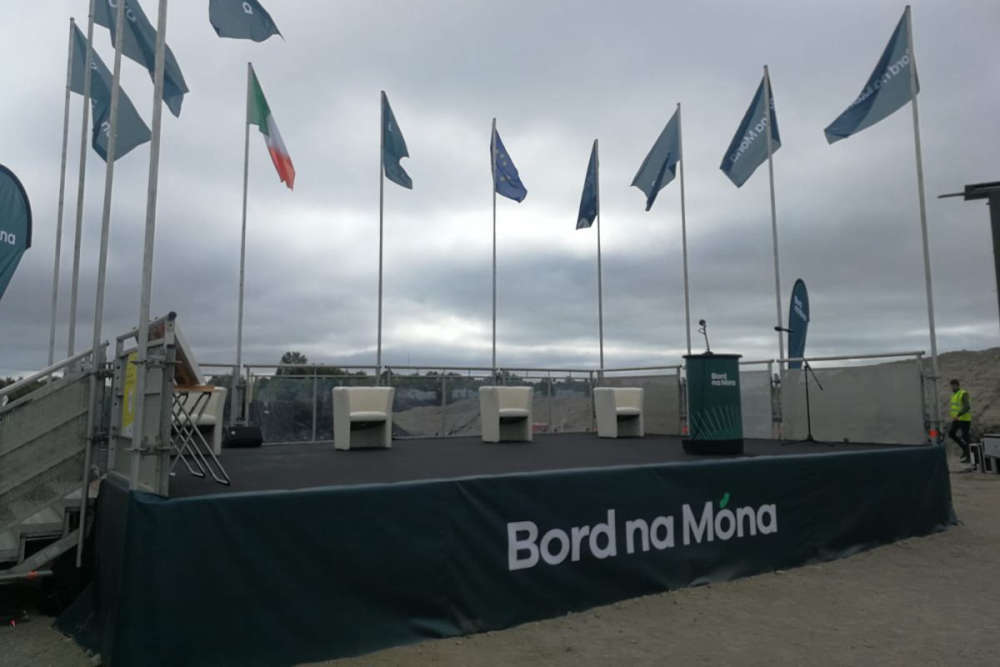 Taoiseach Micheál Martin and Environment Minister Eamon Ryan are in Offaly this morning.

They'll do so by expanding its climate solutions businesses, partnerships with third parties and the construction of Ireland’s renewable energy infrastructure.

The semi-state company say that, combined with 550 jobs secured in the last 18 months will return direct employment to pre-transition levels.

Taoiseach Micheál Martin and Envrionment Minister Eamon Ryan are in Offaly this morning to make the announcement.

The head of Bord na Mona says returning to pre-transition numbers of jobs shows its commitment to being a leading employer in the region.

Tom Donellan says the company is now officially in the climate solutions business and that people and the planet can win.

It follows today's announcement that 1,400 jobs will be created or enabled through generating renewable energy, recycling, rehabilitating peatlands and creating new amenities.

Mr. Donnellan says no one expected the company to be in this position when it began its 'Brown to Green' journey:

“Bord na Móna has shown that Ireland can successfully tackle climate change by focusing on solutions that work for people and the environment. Working with my Department and the National Parks and Wildlife Service, Bord na Móna is pioneering the rewetting of our bogs to help us store carbon. Workers who once harvested peat are now using their skills to protect nature. At the same time, the company is being hugely ambitious in the areas of renewable energy and recycling. This is creating green, innovative jobs in the Midlands and beyond, and demonstrating that as we move from brown to green we can deliver a just transition.”

“Just transition to me means good, sustainable, long-term jobs for the workers affected and I’m really glad to see the creation of these 1,400 jobs for the Midlands.”

Here's the details of what Bord Na Mona are announcing this morning:

1,435 climate solutions jobs are currently being created and enabled by the company across the Midlands. 1100 of the roles are being generated directly by Bord na Móna operations while 335 are being generated through partnerships with third party companies

550 jobs have been created over the past 18 months as it develops renewable energy, recycling infrastructure and Carbon Storage through peatland rehabilitation. Land and Habitats development and recycling roles have also been created through partnerships with other companies.  In addition, Bord na Móna will create a further 250 jobs in renewable energy, recycling, consumer products and land and habitats development in the next five years.

Along with direct employment creation the company also confirmed a yearly average of 300 construction jobs will be created on climate action projects, mostly renewable energy projects, across the Midlands. Over the next 6 years, our pipeline of projects will create 1,600+ jobs in construction – giving an average employment level of circa 300 per annum. 335 jobs will also be enabled through partnerships and its invest and enable plan (with third party companies) to be created in the next five years. These roles are being created by companies either partnering with Bord na Móna or being enabled by the company in a variety of ways to locate at Bord na Móna properties and premises.

NEW: 885 jobs to be created by @BordnaMona in "climate solutions" over next 4-5 yrs, "mainly in the midlands".@MichealMartinTD & @EamonRyan
in Offaly to make announcement.

Looking to get more on what the jobs actually are and when exactly they'll come on stream.@Midlands103 pic.twitter.com/SxMDjgLkpI