Government Targets Upgrades To 24 Midlands School Over Next Four Years The ambitions are laid out in the National Development Plan.

The government aims to have 24 school building projects in the midlands near completion by 2025.

A total of 4.4 billion euro in capital funding has been earmarked for school infrastructure under the new National Development Plan.

The two dozen school building projects in the midlands vary from extensions, to refurbishments, to new builds.

They're all currently in construction or at an advanced stage of planning and design.

There are 11 projects in the pipeline in Westmeath, including three with a price tag of over 1 million euro.

A new building is on the way for St. Mary's Special School in Delvin and Meán Scoil an Chlochair in Kilbeggan.

In Laois, seven schools are set for upgrades - including Kolbe Special School in Portlaoise which is due to move into a new building.

Five Offaly schools are also being extended, while one - Seir Kieran's National School in Birr is being renovated.

The government says all 24 projects will either be under construction of completed between 2021 and 2025. 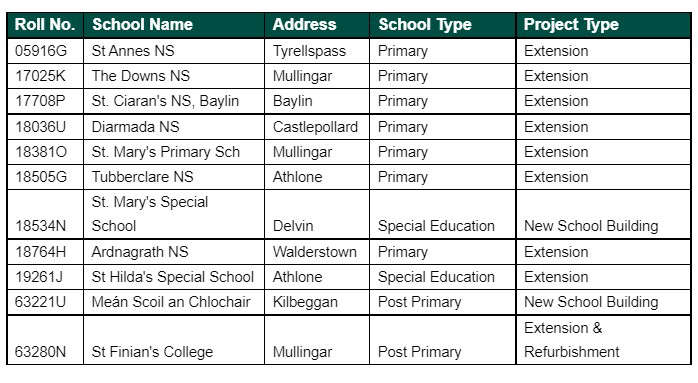