LIVE: All You Need To Know About Budget 2023 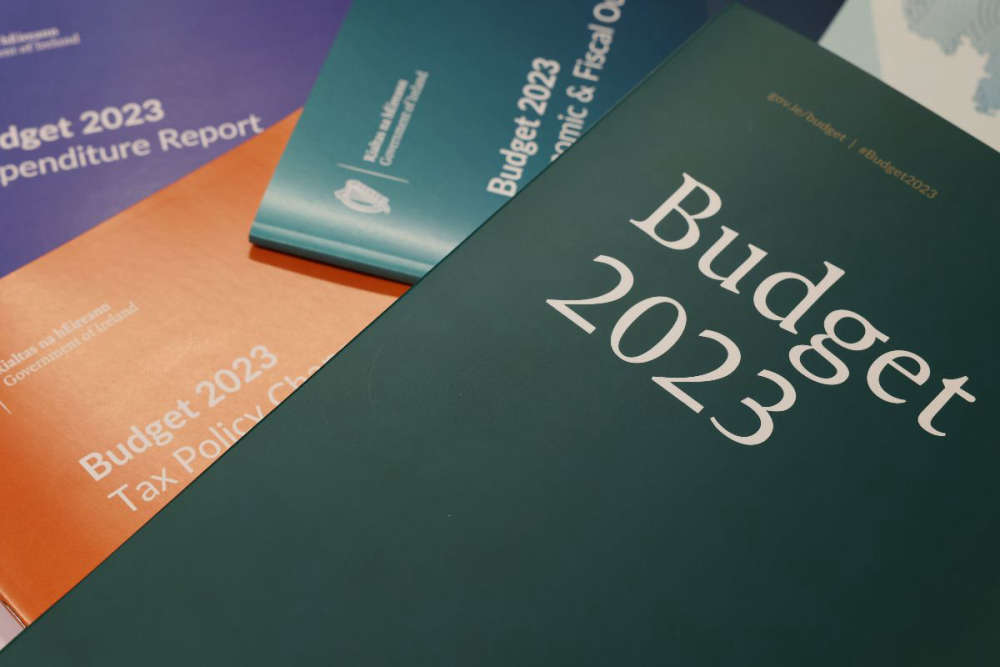 Here's all the latest from the government's landmark budget announcement...

The government is today announcing one of the biggest budgets in the history of the state.

A package of over €10 billion is being released, with a tranche of measures to offset the rising cost of living set to be included.

Finance Minister Paschal Donohoe will get to his feet in the Dáil just after 1pm to announce the details.

Stay tuned for all the latest here...

- Minister Donohue has described Budget 2023 as "a cost of living budget".

- The Department of Finance estimates inflation of 8.5% this year and 7% next year.

- Cost of one off measures in the budget will amount to €4.1 billion, core budget measures will cost €6.9 billion - the total budget is €11 billion.

Excise rate reductions of 21 cent on petrol and 16 cent per litre and 5.4c per litre in Marked Gas oil, 9% VAT rate for electricity and gas extended until 28th February 2023.

Department of Finance estimates inflation of 8.5 percent this year and just over 7 percent next year.

Minister Pascal Donohue explains energy is just one of a range of factors behind that:

Minister @paschald has announced an extension to the current temporary reduction in the excise duty on fuel.

This reduction will now remain in place until the 28th of February 2023. #Budget2023 pic.twitter.com/MSfv7W4jRY

The main tax credits (personal, employee, earned income) are being raised by €75.

USC concession for those with a medical card earning less than 60k is being extended for another year.

Further analysis to take place on a new third rate of income tax with review published before next year's Summer Economic Statement.

Donohoe says significant lead in time needed but could be done by Jan 2024.

Help to Buy extended at current rates until the end of 2024.

The pre-letting expenses for landlords is being doubled to €10,000 and the time a property must be vacant reduced from 12 to six months.

Vacant Homes Tax introduced, will apply to homes which are occupied for less than 30 days a year

There will be a new Residential Zoned Land Tax, local authorities to publish draft maps in November.

The residential development stamp duty refund scheme is being extended to the end of 2025.

A levy on concrete blocks, pouring concrete and some concrete products will be introduced, to help pay for the MICA redress scheme.

The levy will come into effect from April of next year, and will be applied at a rate of 10 per cent.

Carbon tax increase of €7.50 a tonne will go ahead as planned on October 12th.

Will put up petrol and diesel by 2c a litre.

However, the Government is reducing the National Oil Reserves Agency levy to 0% to offset the cost.

This is worth 2c a litre.

Five tax reliefs will be extended.

A Temporary Business Energy Support Scheme has been announced to help those who are facing skyrocketing electricity bills.

Minister Pascal Donohue says it will be managed by Revenue and it's proposed the scheme will work by comparing average unit prices this year to the costs incurred last year:

Companies will be allowed to give employees €1,000 tax free a year in vouchers, up from current €500.

50 per cent excise relief to small independent producers of cider.

The government is halving the cost to apply for a Special Exception Order for late night venues.

9 per cent VAT rate on hospitality will continue until 28th February 2023.

VAT on defibrillators reduced to 0% from January 1st 2023.

Minister @Paschald has announced that the VAT rate on defibrillators will be reduced from 23% to zero #Budget2023 pic.twitter.com/5wxOAxZWGn

Ireland to be part of EU windfall tax approach but will go it alone if needed.

Bank levy extended for another year to raise €87 million per annum.

Pack of 20 cigarettes up 50c and pro-rata increase on other tobacco products.

Minister Pascal Donohue has also announced a proportionate increase on other tobacco products too:

€2 billion going into the Rainy Day fund this year.

€4.5 billion of non-core expenditure to deal with risks like Brexit, Ukraine and the end of Covid.

Public Expenditure Michael McGrath has now taken over proceedings in the Dáil with the following announcements...

€600 electricity credit for all households.

First payment before Christmas and two in the new year.

€337 million for grants for energy efficiency. This will fund 37,000 home energy upgrades.

€12 across the board increase in social welfare.

€500 lump some on working family payment

Qualified child allowance up €2 a week.

€500 payment for carers and those with a disability in November

€200 on the living alone allowance.

Reduction in student fees of €500.

Increase of between 10 and 14 per cent in student grant.

Postgrad grant will increase by €500.

20% off public transport for all.

€2.6 billion for transport to progress busconnects, metrolink and dart+.

€100 million for schools to deal with energy costs .

Reduction in the pupil teacher ratio by 1 point to 23:1 with 370 extra teaching posts.

Funding for free school books for all primary school pupils.

686 additional teachers to support those with special needs

Income threshold for fuel allowance will increase from €120 to €200 above state pension.

There will be an added fuel allowance lump sum, as announced by Minister McGrath:

€1.7 billion for housing to deliver social housing build targets of 9,100.

Total €6.2 billion for the Department.

New low-cost loan for residential retrofits has been introduced.

Funding to recruit 6,000 additional staff to the health service.

Inpatient charges will be removed for all public patients under Budget 2023.

Minister Michael McGrath is also extending the free GP card to another 430,000 people:

Extending contraception to women aged 16 to 30

€439 million will be provided for the ongoing response to Covid-19.

There will be funding for an extra 4,800 additional apprentice placements

Up to 185,000 households to be passed by the National Broadband Plan next year.

€11 million for the continued response to the refugee crisis from Ukraine and housing refugees.

There will be a €5 million increase in the garda overtime budget to over €100 million.

An increase of €100 million euro for Irish Aid
The Official Development Assistance will be more than €1.2 billion in 2023
€75 million of that will go to humanitarian needs in Ukraine.

ARTS
€90 million extra for arts, tourism, culture and media to help that sector recover from Covid

€1.25 million to support Irish as a living language in the Gaeltacht