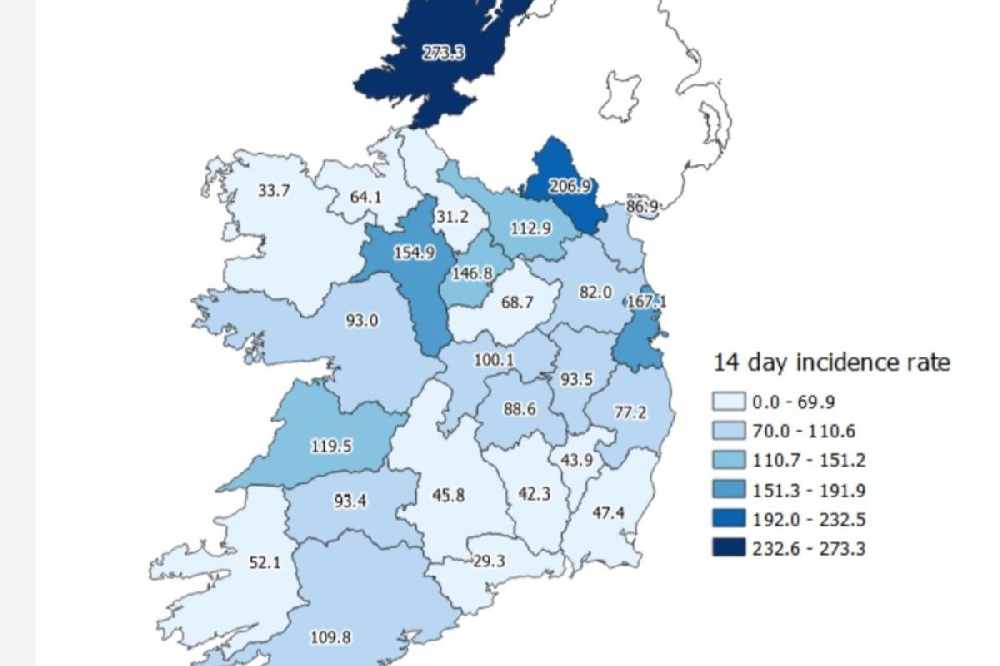 It comes as 150 people are being treated with the disease in Irish hospitals.

Offaly is one of nine counties that now have a 14-day Covid-19 incidence rate of more than 100.

It comes as 150 people are being treated with the disease in Irish hospitals.

Longford, Roscommon, Cavan, Clare, Cork, Donegal, Dublin and Monaghan all now have a 14-day incidence rate of more than 100.

The rate is calculated by looking at the number of cases over the past 14 days and giving a figure based on 100,000 of its population.

Donegal remains the county with the highest rate of incidence with its figure at 273, followed by Monaghan on 206.

The last week has seen a 29 percent rise in the national figure.

And after being a county of concern for a  number of weeks Waterford has seen its 14-day incidence rate fall for six days in a row, and hasn't seen a rise in 9.

It is now the county with the lowest rate of transmission in the country with an incidence rate of 29.3 per 100,000 people.

Concern had been raised by the National Public Health Emergency Team in recent days about hospital capacity with the rise in Covid-19 cases.

This morning, the HSE confirmed there are 150 people in Irish hospital diagnosed with the virus - a 28 percent rise on last week's figure.

While last night in ICU there were 34 people with the virus or suspected of having the disease.